Amazon boat trip, we did two trips by slow boat/cargo ship in Brazil. We heard about trips with terrible/little food, dirty toilets and so many tourists there was a section jokingly referred to as ‘Little Europe’. Our experience was different, being the only tourists on both our trips, receiving good food and the toilets were clean. We saw some animals, but unfortunately no pygmies with blow pipes. Basically we were lying in our hammocks for two weeks, reading, writing and looking at the shore. We did one trip down river from Tabatinga to Manaus (4 days). Our up river trip was from Manaus to Puerto Velho (7 days).

Price. Getting on a boat. What to bring. Food. What did we do the whole time? Safety. What did we see? Difference between the two trips. 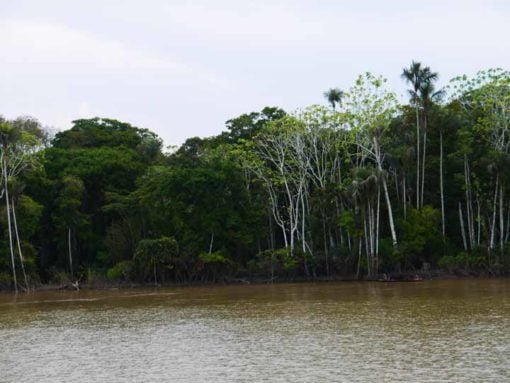 In my head I always pictured traveling down the amazon in a slow boat as an awesome adventure. I have done a couple of multi-day ferry and boat trips around Asia and Central America and knew there would be long boring parts, but just thinking of the word Amazon had me excited. Still I imagined scenes from the movie ‘Anaconda’ with Ice Cube and Jennifer Lopez floating through dense jungle in a dilapidated old boat battling mosquitoes and monster reptiles.

Lonely Planet described some different challenges and I quite “boats are always slow and crowded, often wet and smelly, sometimes dull and never comfortable.” It still sounds like and adventure we can handle it; I have done long crowded train trips in India, slow, dull, uncomfortable boat trips in Indonesia and smelly, wet rock festivals in Europe and this sounded like a combination of the food, sleeping areas and toilets of these three!

We paid B$ 200 ($48/R795) for each trip; this included 3 meals per day, unlimited cold drinking water and on the first boat bottomless coffee. The distance of the two trips were about the same but up river is much slower than down river.

AMAZON BOAT TRIP – GETTING ON A BOAT

Our first trip was from Tabatinga to Manaus in Brazil on a brand new boat called ‘The Mun M Fernandez’. Manaus is deep in the Amazon Jungle and can only be reached by plane or boat. We flew to Leticia in Colombia from Bogota (COP167 585/$50/R850). We stayed in Leticia and walked to Tabatinga in Brazil, it is basically one town with a border somewhere in town. You enter a different country, but there is no borders post, just remember to go to the airport and get stamped out of Colombia and find the immigration office in Tabatinga to get stamped into Brazil.

Do these the day before departure or you might miss your boat; we sat in front of a closed office for hours waiting for officials on lunch. It is your responsibility to get the correct exit and entrance stamps and the fine is $500 if you get caught without these.

We walked to the harbour and asked around for boats, there are smaller wooden boats and bigger boats that can take a hundred plus passengers, cars and cargo are on the bottom deck and passengers on the top two decks. It was easy to buy tickets directly on the boat; this also gives you a chance to check out the boat. We were on the bigger boats both times. Both our boats were very empty only having between ten and thirty passengers on board at various times of the journey. For our second boat from Manaus to Puerto Velho we ended up buying a ticket at our hostel in Manaus (Ocara Hostel), the price was the same as in the harbour and they organised a ride for us to the harbour.

PEOPLE ON THE BOAT

We were the only tourists on both boats. On the boat from Manaus to Puerto Velho we had about 15 Brazilian army officers traveling with us, they stayed on the top deck and were very friendly, but I think our food rations were a bit smaller on this boat because all the officers still had to eat after us. It was sometimes interesting watching other passengers; there was a lady with a small child, she was out of her hammock early every morning doing her make-up and getting all dressed up for a day of hanging around the army officers, smiling and fishing for a husband.

We met a Venezuelan/Chilean couple that met online, the man spent about 5 days by bus to visit the lady in Venezuela and they were heading back to his home in Chile, he was looking fwd to being back in Chile after having spent a couple of months in Venezuela, see our entry on Venezuela….

We always felt our things were very safe on the boat, but there was one passenger that looked a bit suspicious. A passenger’s phone disappeared charging during the night and when the suspicious looking passenger wanted to get off at the next port the police stopped him and searched his bags, finding a bag of cocaine and the missing phone, what an idiot drug smuggler!

After reading a couple of blog posts we were not expecting much and we bought some unnecessary food; 10L of freshwater that we never opened and some noodles and food we never ate. Snacks are a good idea. I think our food on the boat was better than we often eat while traveling! The food was better on the second boat than the first, both in quantity and quality.

Breakfast in Brazil is not very big; breakfast is at 6 o clock and is only bread rolls and margarine, so I can recommend that you bring some peanut butter or jam to help you wake up with a smile. I love coffee, but the way they drink it over here is something to get used to, black with a lot of sugar, so much it is almost syrup. You drink it like a shooter, pulling your face and everything. Lunch was at 12:00 and dinner at 18:00. Food was good, but on the second trip we ate a lot of chicken and I was very tired of rice and chicken at the end.

WHAT DID WE DO THE WHOLE TIME?

We spent most of the time lying in a hammock looking at the river and the jungle, reading, writing and talking nonsense (we talked about food and diving a lot). This is a good time to learn a language and I quizzed Alya on her Afrikaans, and she me on my Spanish everyday. There were plugs next to our hammocks, but on the first boat I did not have the correct adapter and wrote blog entries by hand in my diary. Just to do something, we did some exercises and stretching on the deck before dinner. Somehow doing nothing makes you really tired and we spent a lot of time sleeping.

WHAT DID WE SEE?

RIVER DOLPHINS, I never knew that fresh water dolphins were so common in The Amazon; we saw many pink and grey river dolphins swimming, playing and jumping every day during our two weeks cruising on the river. Unfortunately we did not have a camera and lens good enough to take a good picture.

CAIMAN CROCODILES, we spent many hours scanning the river banks, during our trip from Tabatinga to Manaus we did not see any. During the seven days cruising from Manaus to Puerto Velho we saw three, all big crocodiles swimming on the surface. Apparently you can see many small caimans on guided tours from Manaus, especially at night when their eyes reflect and shine in torch light.

TURTLE, unfortunately we saw one, two locals guys came up to our boat with a small boat trying to sell a turtle to our boat for food, I am not sure what our chef shouted at them, but they drove of quickly.

MONSTER CATFISH, this thing was enormous maybe 50kgs, it was struggling on the surface and two of the army guys jumped into a small boat tied behind our boat and chased after this catfish doing all sorts of manoeuvres on the surface. I think it was a Piraiba catfish, they grow up to 180 kgs and apparently eat anything, even monkeys have been found inside these catfish! It was probably trying to dislodge something stuck in its throat that it tried to swallow.

BIRDS, we saw many birds from the boat, most significant was some large Macaw parrots that flew by, making their loud normal noise.

MEETING OF THE WATERS

About 15km before Manaus the white Solimoes River meets the black Rio Negro river. The “white” coffee colour is caused by mud and the more clear “black” colour is the result of tannins suspended in the water. The density of these two rivers is so different that they never mix and run next to each other for a couple of kilometres.

Related article – 29 Places not to miss in South America

We would love to hear from you, so don’t be shy to comment give suggestions or ask questions!